Descending from the physical and spiritual heights of Heavenly Lake, we again sped through the centre of Urumqi, itself the centre of Uighur culture, that dominates the Xinjiang province. Uighurs, Central Asians who ruled the region for a few hundred years before the Mongol invasion, have been subject to increasing persecution by the Chinese government over the past decade, largely due to their adherence to Islam. More about that later.

Just out of Urumqi we left the superhighway G30 for a road headed southwest, into the Taklamakan desert, sometimes a widely divided superhighway, sometimes two lanes where the new one was under construction. 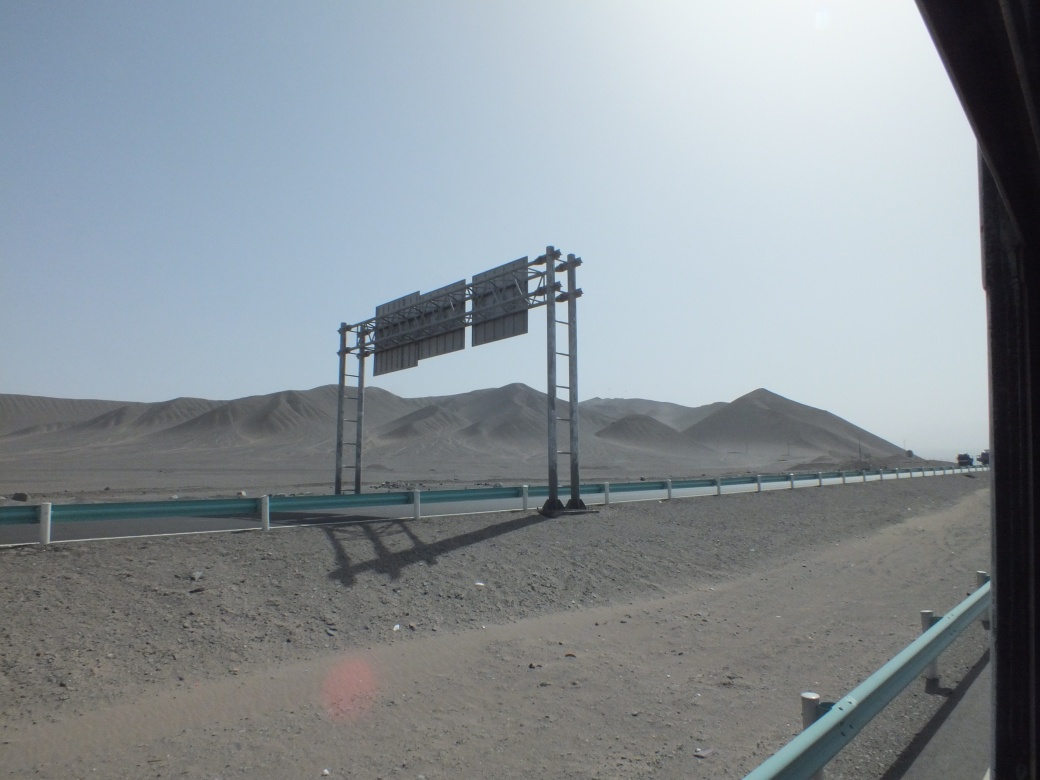 The plan was to cross the desert to Kashgar in three days, camping for two nights. However, the Chinese government’s fear of terrorist attacks on isolated tourists compelled us to stay in hotels, in Korla and Aksu. Tant mieux- both qite sharming, modern cities. We were descending through the edges of a major mountain range, the mountain range, the Tjan Shan, through magnificent gorges marked by signs of very heavy runoff, past huge dunes… 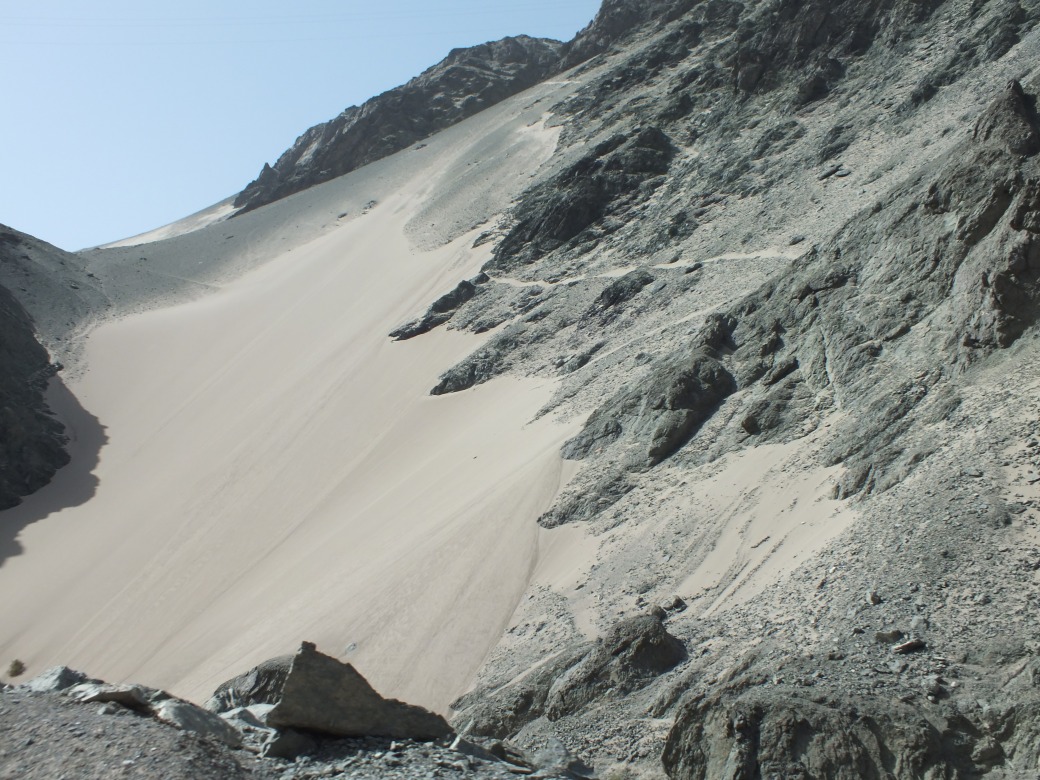 …back down into the Turpan basin, below sea level. The mountain ridges gave way to an infinite plain of sand and rock and scattered vegetation, also marked by signs of massive water flows. 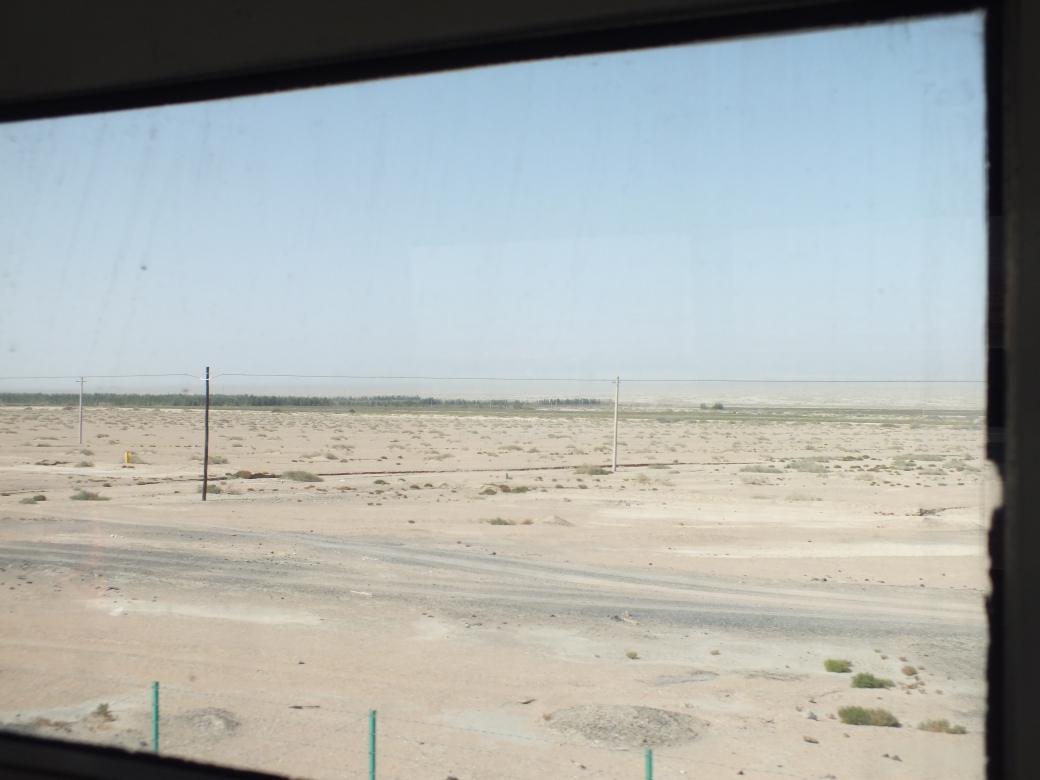 At times we ran parallel to the trans-China train that I would ride on the way back.

…as we approached Korla, toward the end of the day. 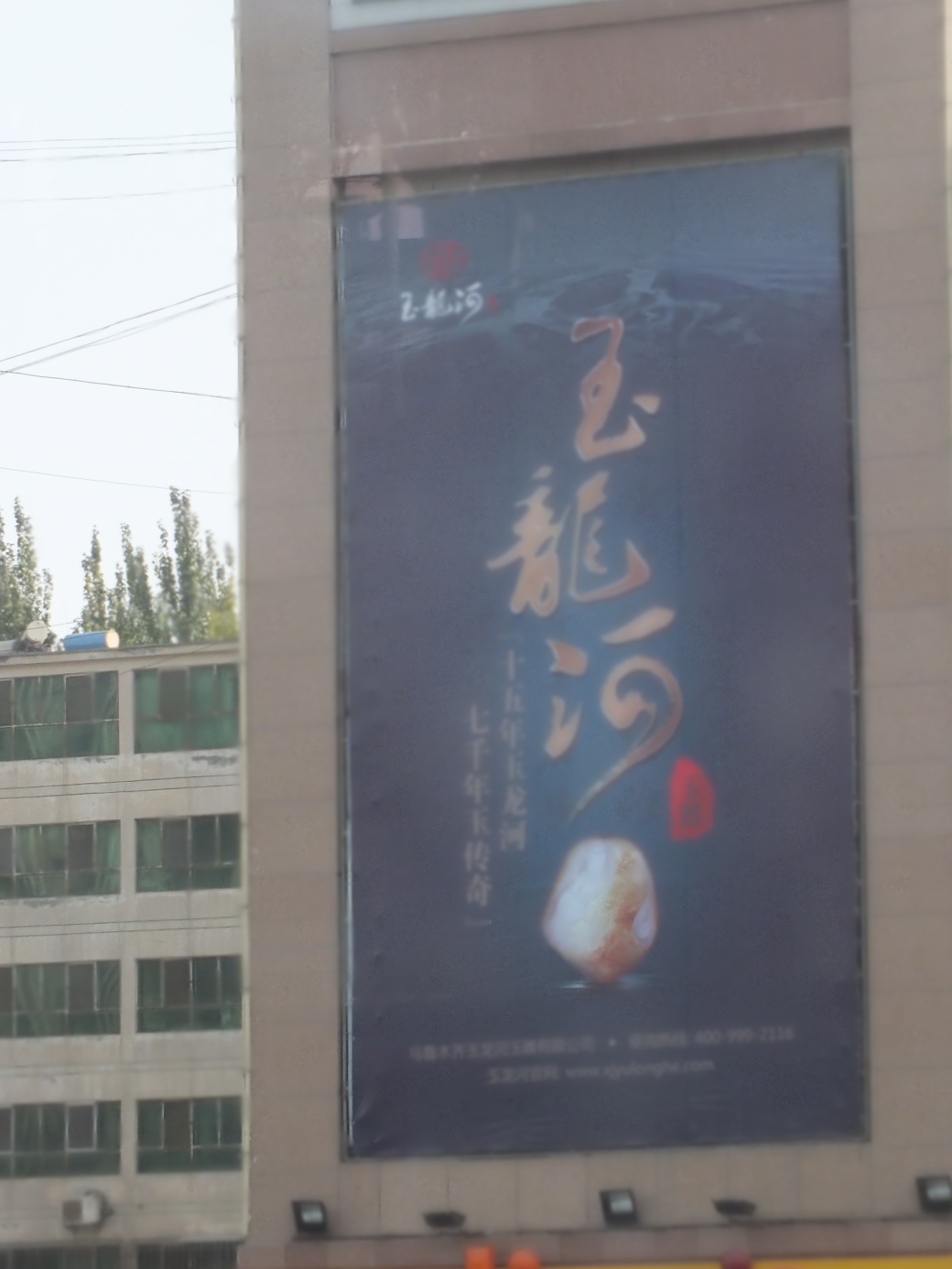 More surprises, another modern city in mid-desert, and a really confortable hotel. One again we measured its quality by the toilet facilities: much above average. 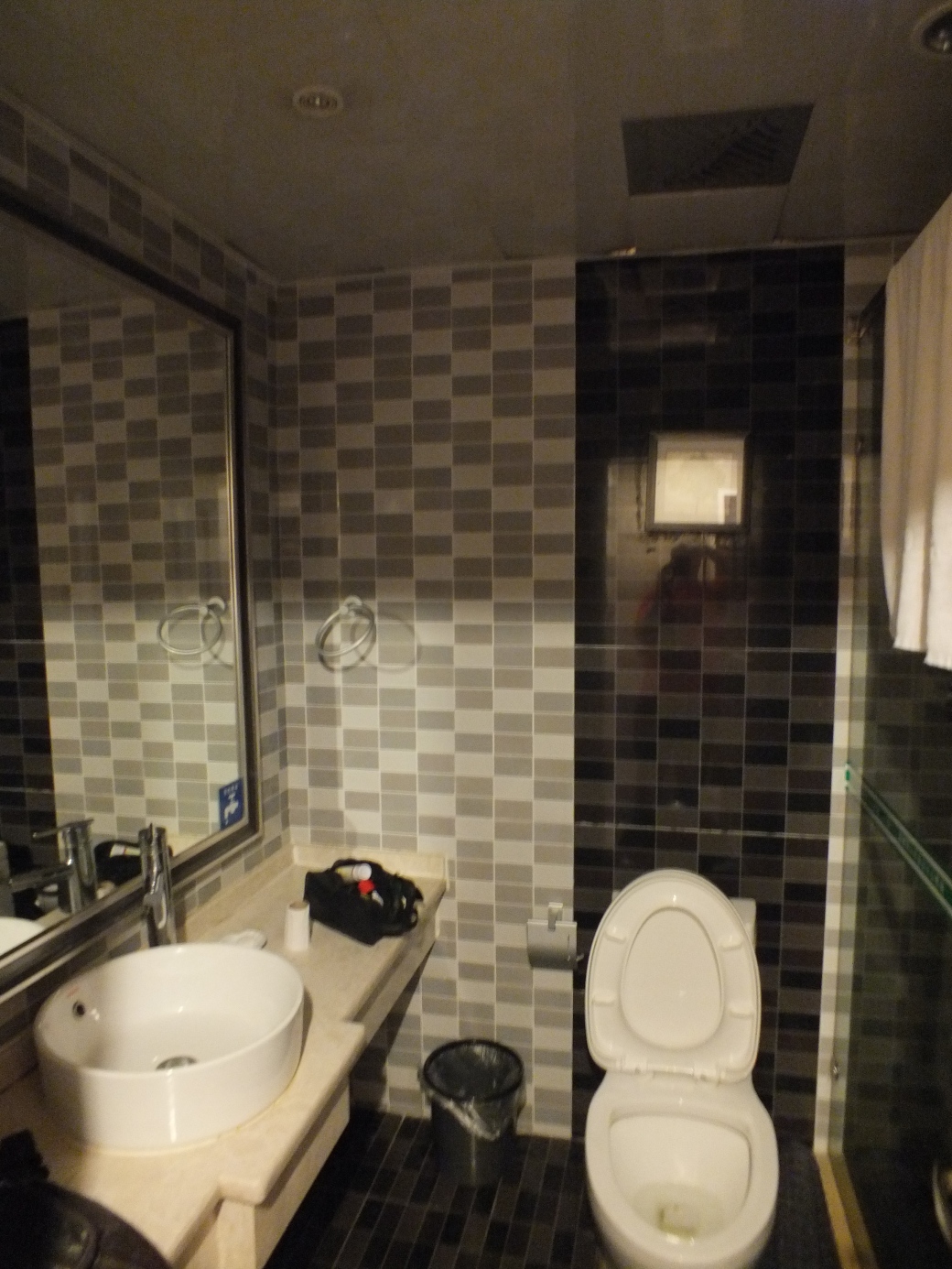 We had a really excellent meal in the hotel’s large dining room. As it turns out, this day was driver-Dennis’ birthday. Earlier I had chased through all the pastry shops I could fine in search of a cake. Best I could do were large chocolate cupcakes. I astounded the shop-persons by taking a dozen. And so we feted our intrepid driver in style. 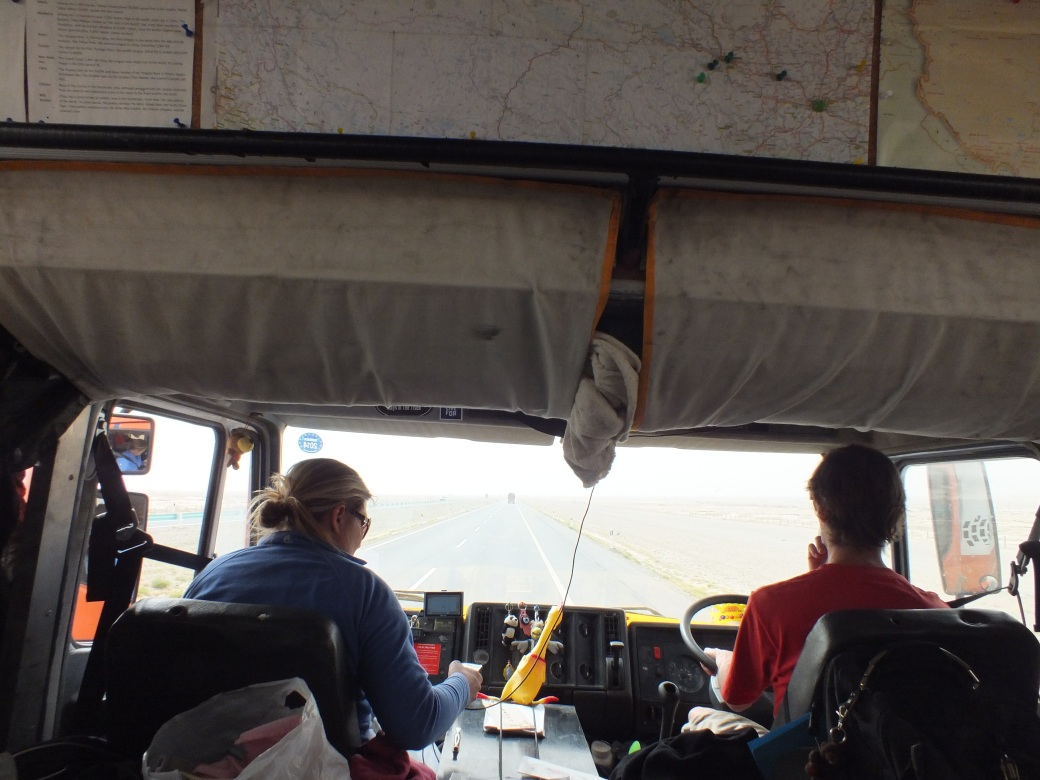 Back on the road next day (I think I breakfasted on those long fried breads from a nearby shop), more desert terrain, past a couple of not-so-charming industrial cities- Kuqa or Luntai no doubt.

Somewhere on this road we stopped for lunch at a roadside truck stop, as usual. As usual I got a ramen that needed hot water- but the system was not working. As I slouched bak to the truck with my useless lunch, a guy in an attached motel-like unit noticed my dilemma and invited me over for some water from his kettle. Must have been a trucker on a layover. I think he wanted to chat with a foreigner or something. I had to prod him to start the kettle. Then it worked so so slowly. I saw the truck had loaded up and was ready to depart, blasting its horn. Finally I had to get up and go- don’t remember if I got the hot water. I did get a few laughs on board.

Eventually, at the end of another day, Aksu, another modern town, a fine hotel, up to our standard. 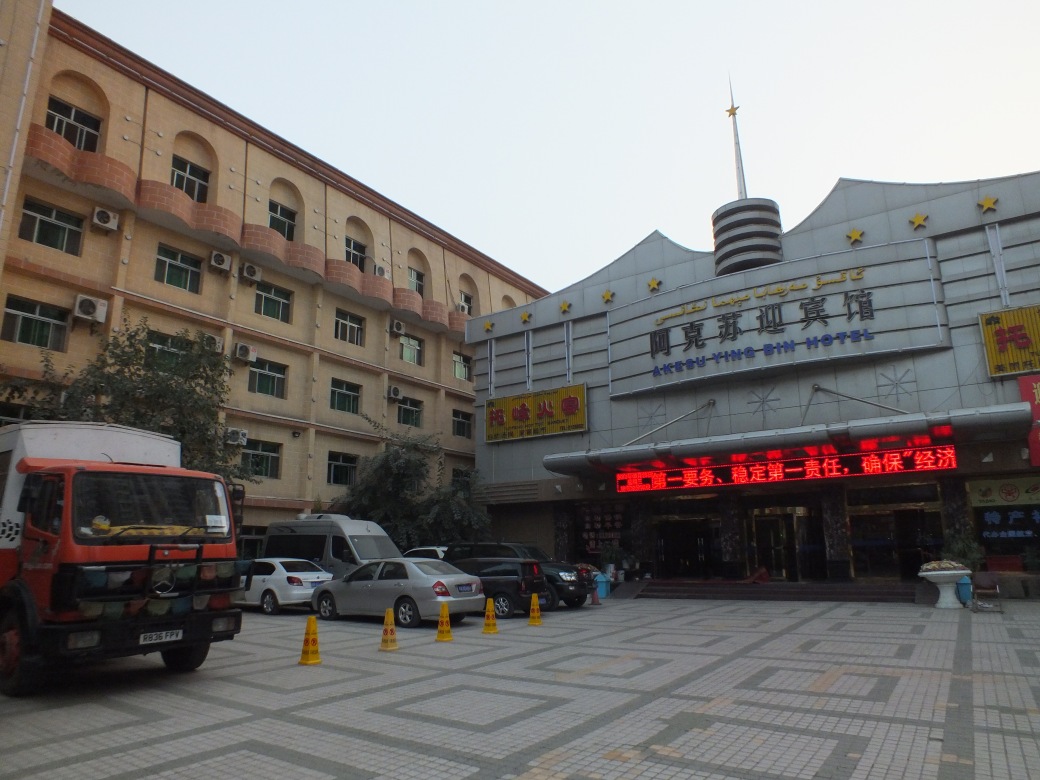 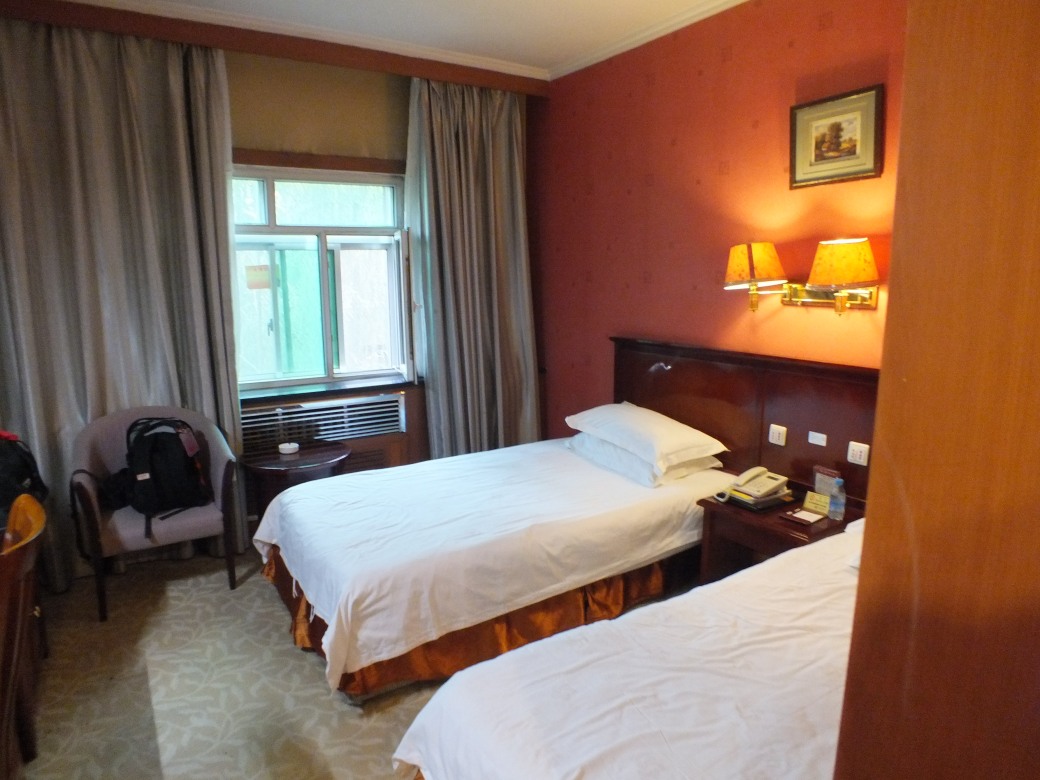 Once again, a really enjoyable visit. I toured the place, to a modern square with attached shopping centre, what seemed to be a zoo by the river, a huge girls’ school. 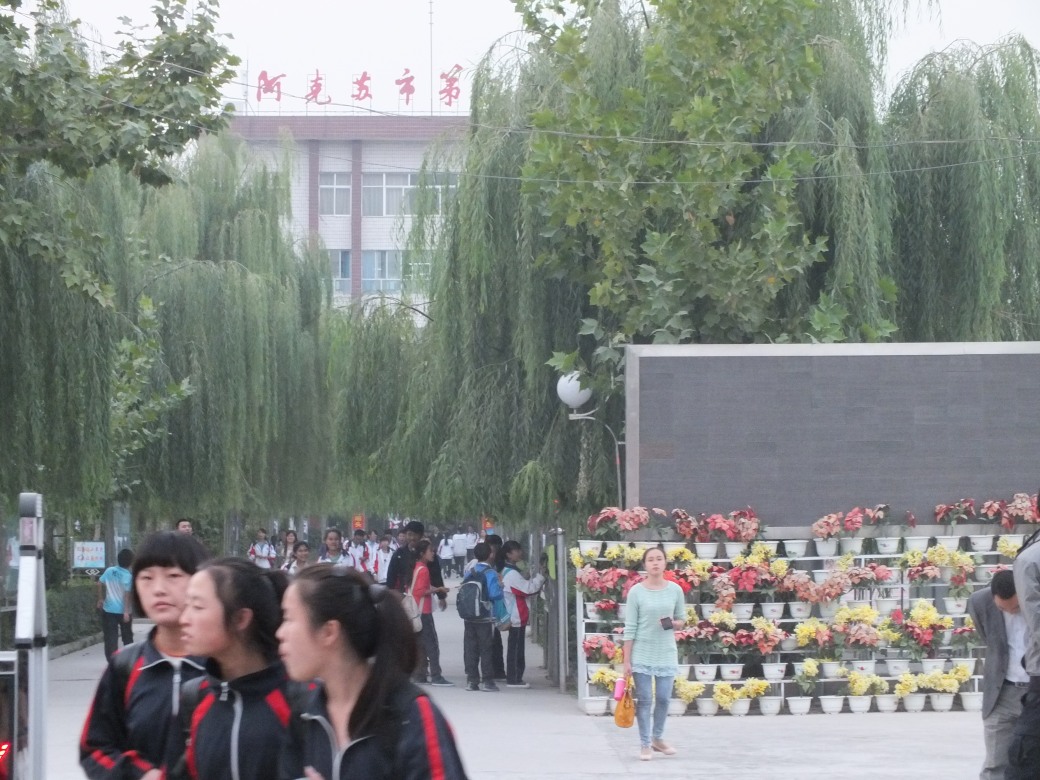 On the way back I took a shot of some really beautiful dresses in a small shop- the lady in charge seemed to object to my violation of copyright,

I found most of our crew feasting in a small restaurant, and joined them. Excellent food, friendly crowd and staff.

Later, after dark, I wandered down the street in the previous shot to a market, really lively after 10pm.

More desert on the road to Kashgar. 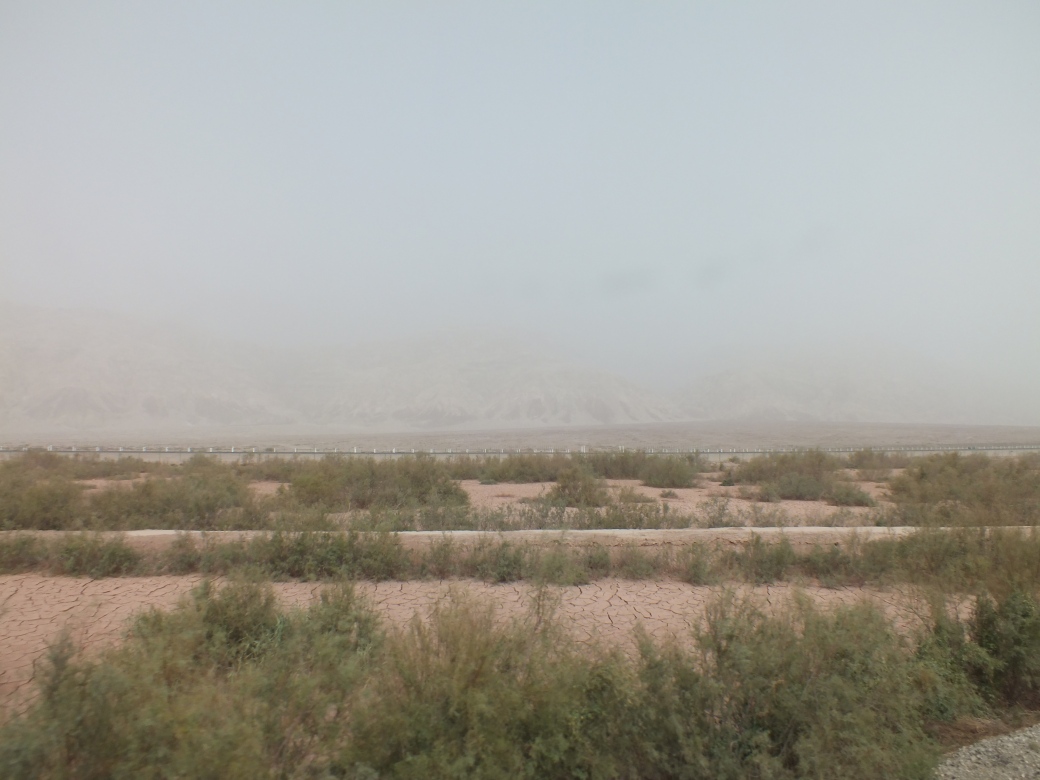 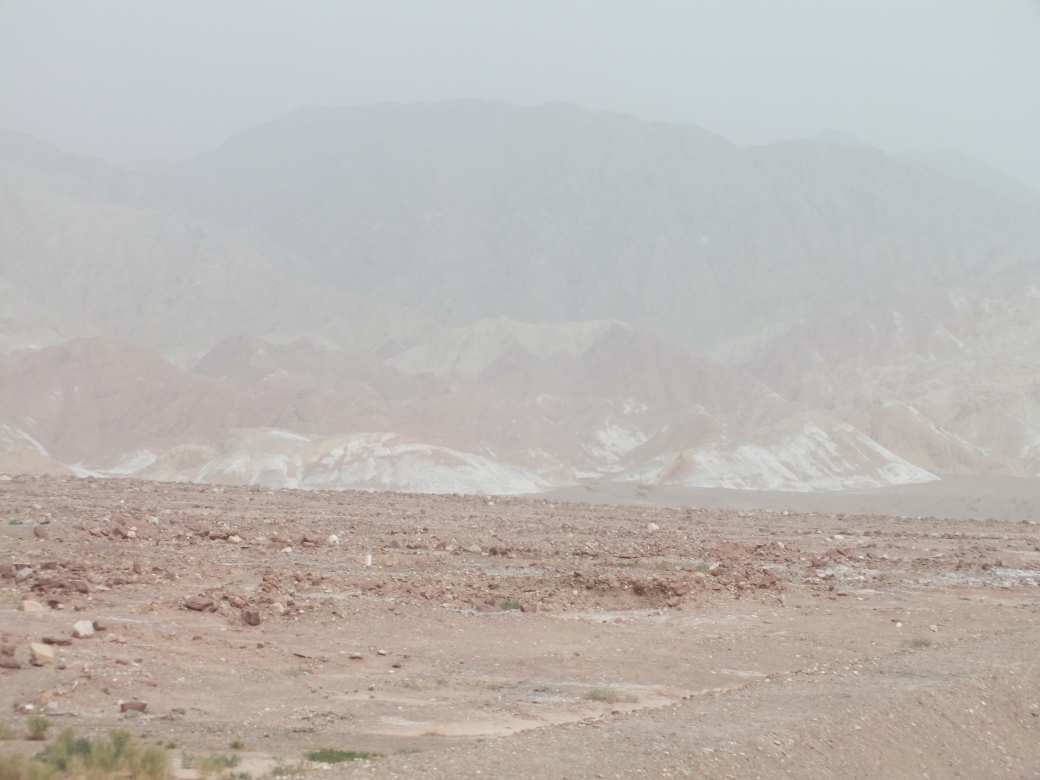 Xinjiang is reputedly one of the poorest parts of China. Not evident in the fine cities- Aksu and Korla- where we stayed. However, on the road something different. Some pretty basic housing, and rag-tag villages. 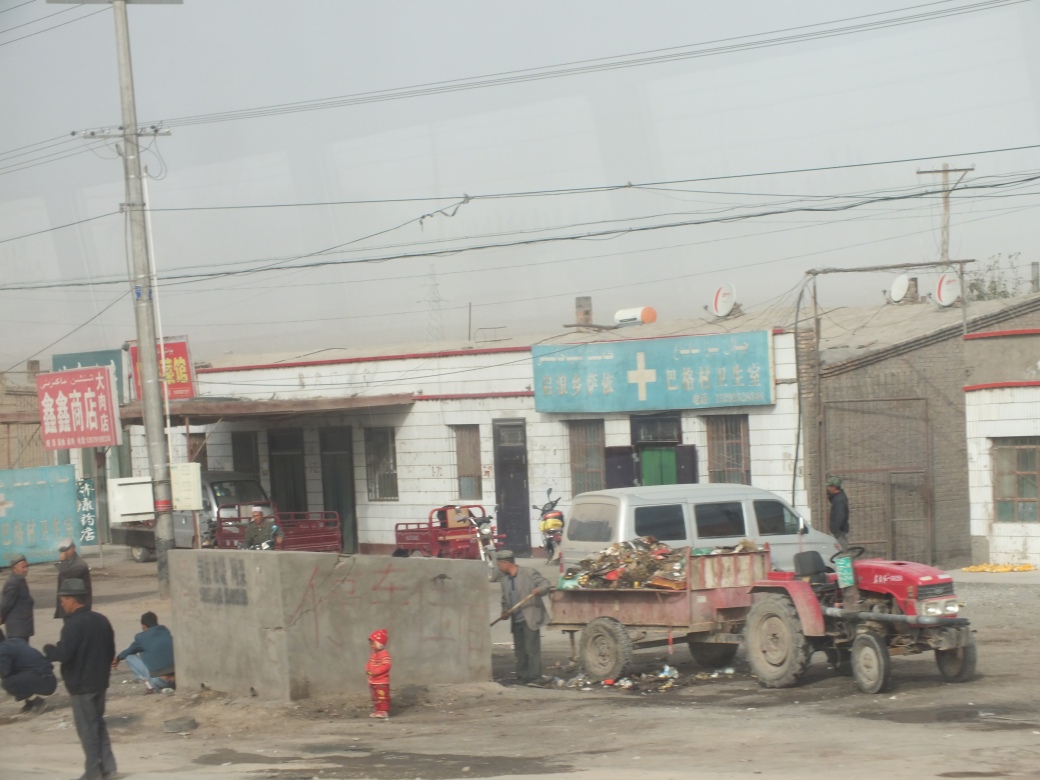 In response to criticsm of its repressive social policy in Xinjiang, the Chinese government claims to have raised masses out of poverty. Recall that in many places we passed blocks of gigantic apartment towers, part of a massive program to relocate the rural folk in urban centres- but apparently quite empty.

On the third day we did indeed reach Kashgar, which proved to be one of the outstanding highlights of the whole cross-China trip. 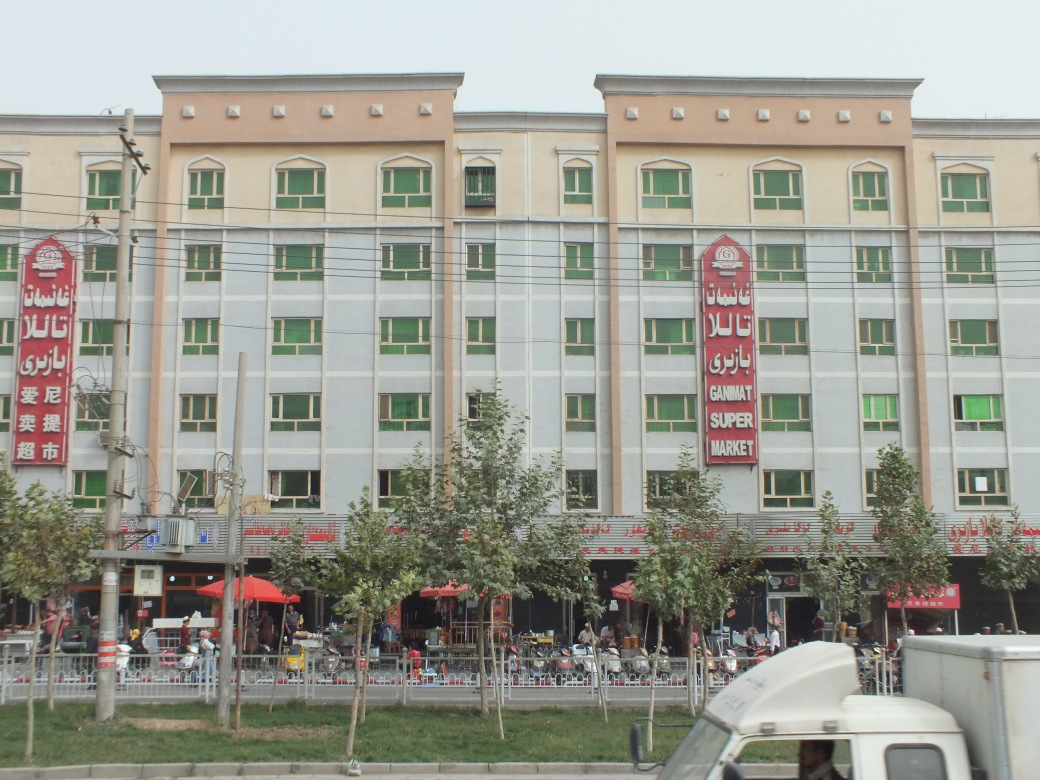 Kashgar is a remote western outpost in the Uighur province of Xinjiang and it has managed to keep an exotic atmosphere under the ubiquitous march of Chinese modernity. This is mainly due to the ethnicmix of Uighurs, Tajiks, Uzbeks and Kyrgy, and is amply portrayed throughout the old town, with blacksmiths, silversmiths, cobblers and others working in ways that have not changed for hundreds of years. The highlight of the week for the local populous and for the visitor is the massive Sunday market. 50,000 people migrate for the day into the town. This is a must for the visitor, as it exemplifies the daily life of the indigenous people – the noise, smells, the animals, the traders, the junk, toot, cloths, rugs, jewellery, tapes and ghetto blasters. Horses,cows, donkeys, sheep and goats all awaiting the inevitable sale. (from Dragoman guide)

Our hotel, located near the green oval on the left of the map above, mixed the modern and the historical. 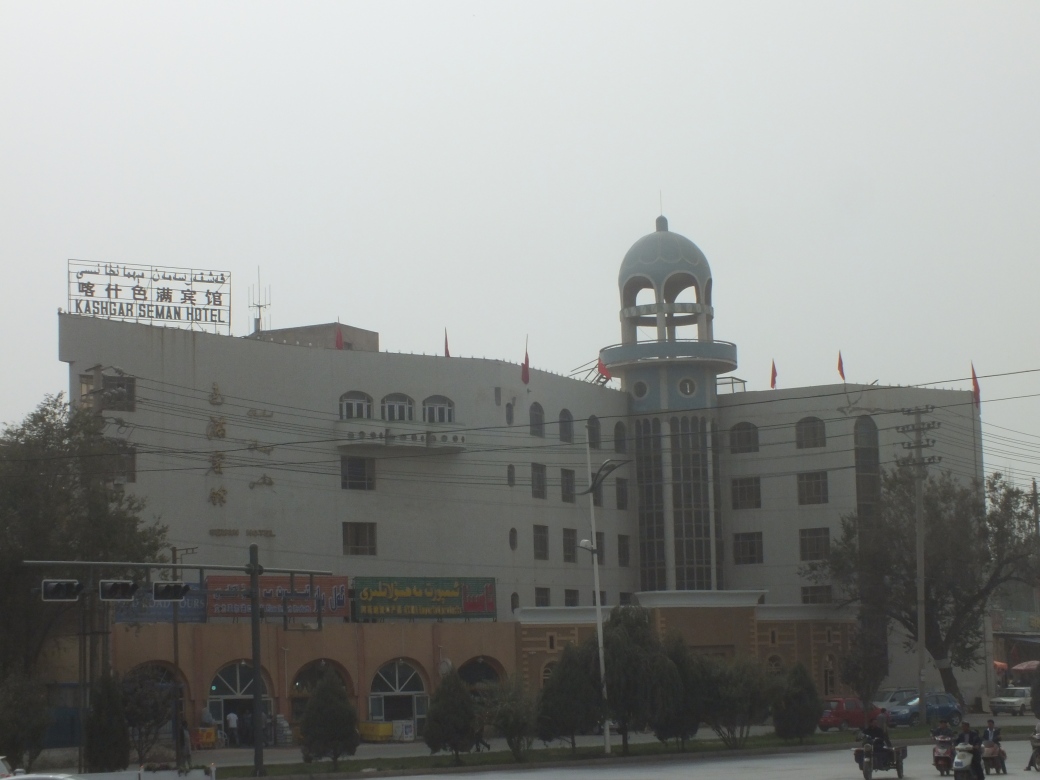 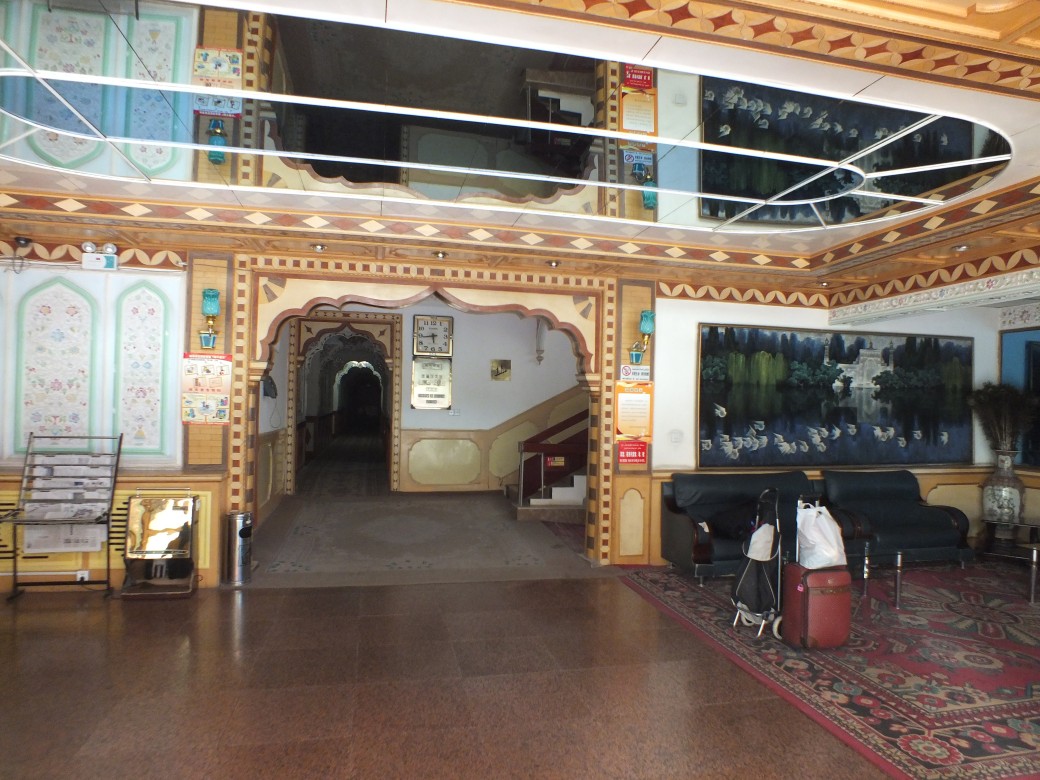 We were of course in the historical section, in the back- but it was fun. 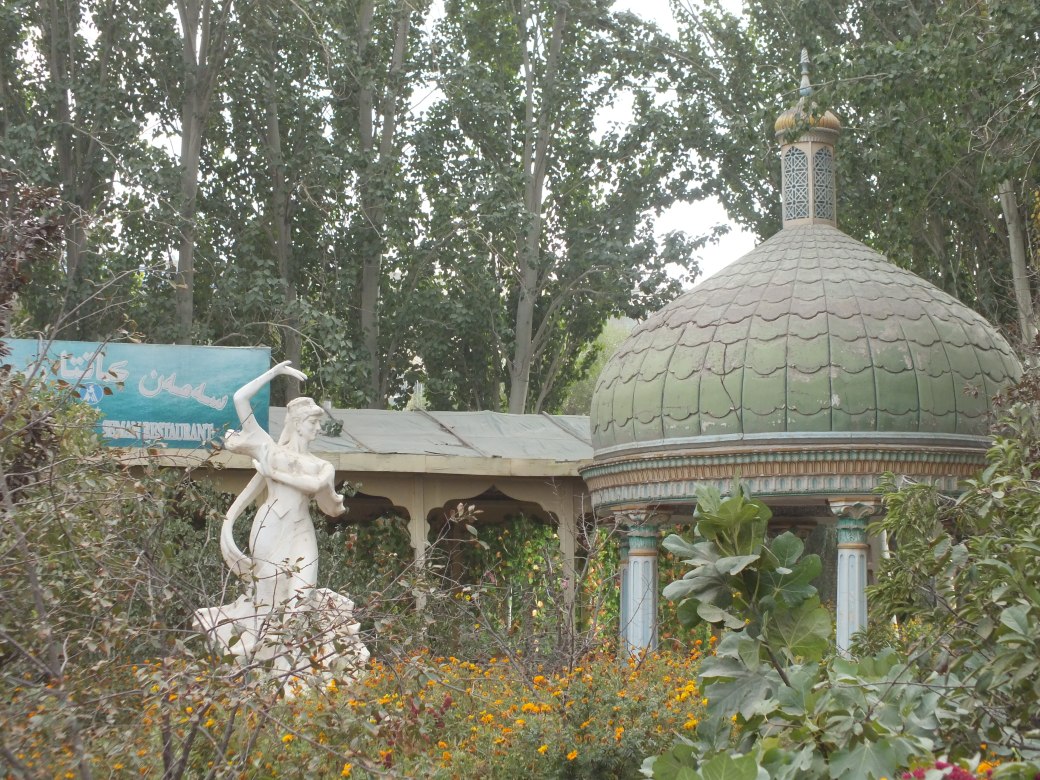 The restaurant bar and kitchen, under a tent-like canopy served as our common room. There were bunches of travelers passing through, college students, some sort of activists plotting interviews with clandestine parties. The food for breakfast and beer at night were excellent.

We were well set up for three wonderful days in Kashgar.

Next: Fond memories of Kashgar

One thought on “Across the Taklamakan”