After a few glorious days in Udaipur, we bounced thru the early-morning streets in tuk-tuks to rejoin the truck, which could not negotiate the narrow streets in the old city. We had parked it beside another lake downriver.

After leaving Udaipur for Mandu we basically traveled upriver, through the cachment basin of the Berach river system, before suddenly starting to rise quite sharply on the Vindhya mountain range. The terrain surrounding Mandu is itself quite spectacular, huge high mesas carved by deep, steep valleys of the Narmada river.

As the narrow road wound over the mesas we began to glimpse signs of a significant civilization: long walls in black stone, massive gates on the road, traces of buildings. 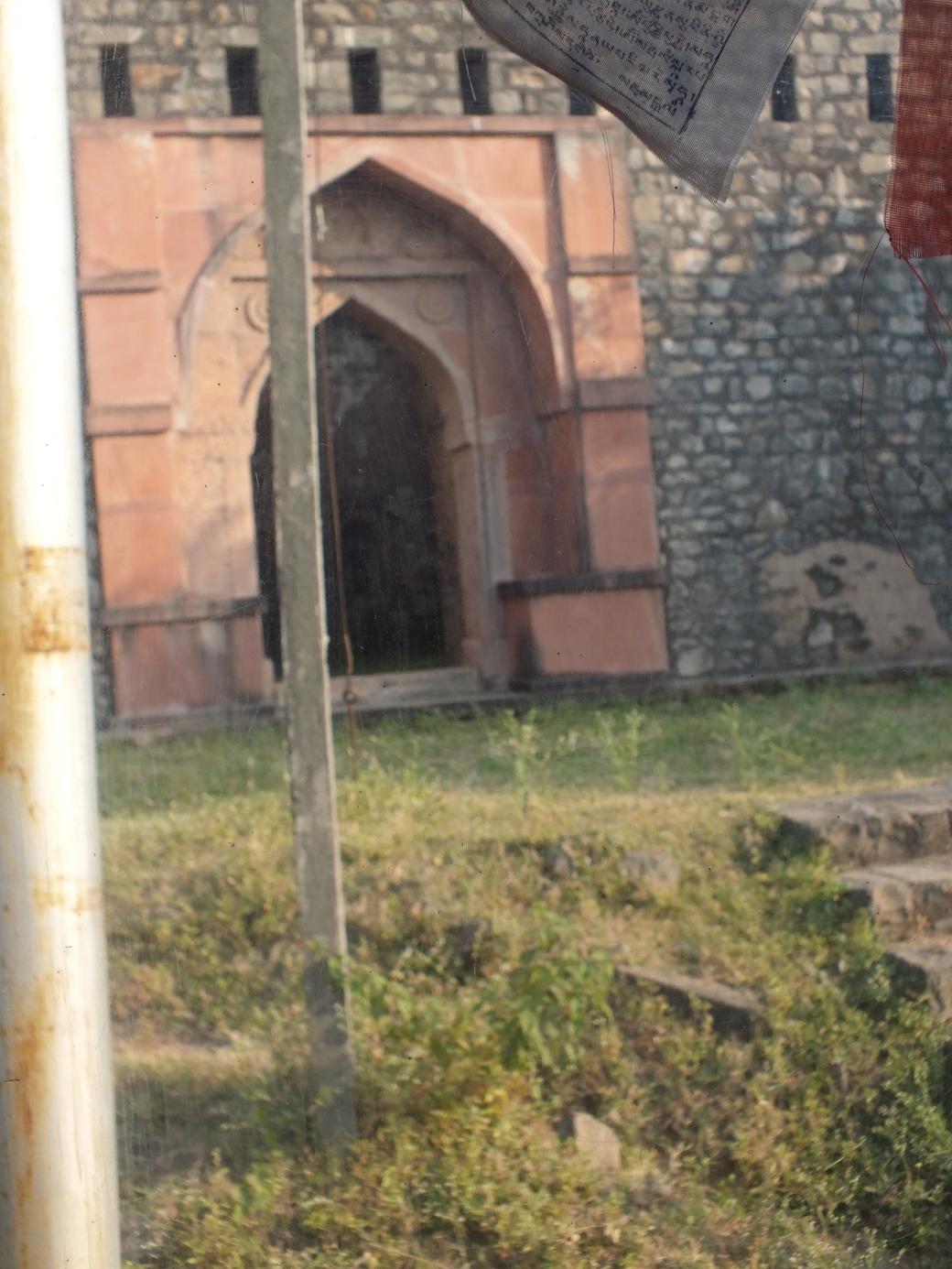 This really impressive scenery suggested that we were approaching Mandu, a high mesa fortified with a long wall enclosing something like 64 sq.km..

Mandu was founded as a fortress and retreat in the early 15th Century CE by [Dilawar Khan and his successors of] the Paramala Dynasty, a rajputish kingdom that ruled over much of the modern-day Malwa region of central Inda. It was conquered in 1304 by the Muslim rulers of Delhi [the Sultan Ala-ud-din, of the Turkish Khalji Dynasty ]. After the victory of the Mughals [Babur], in the early 16th Century in Delhi, the Afghan chieftain of Mandu, Baz Bahadur, fled Mandu instead of facing the Mughal army. It was taken by the Maratha Dynasty in 1732, and was mostly abandoned when they moved their capital to the city of Dhar. [modified Dragoman notes] 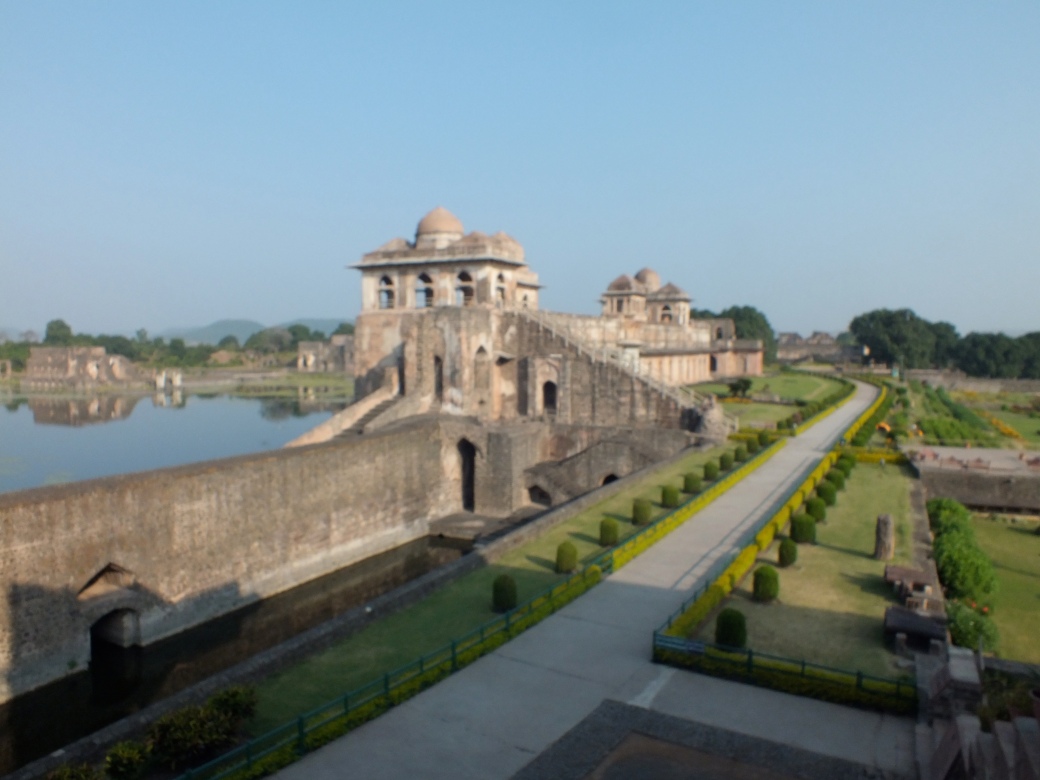 The royal enclave, the Jahaz Mahal or ‘ship palace’, which appears to float on the lake-like tank. 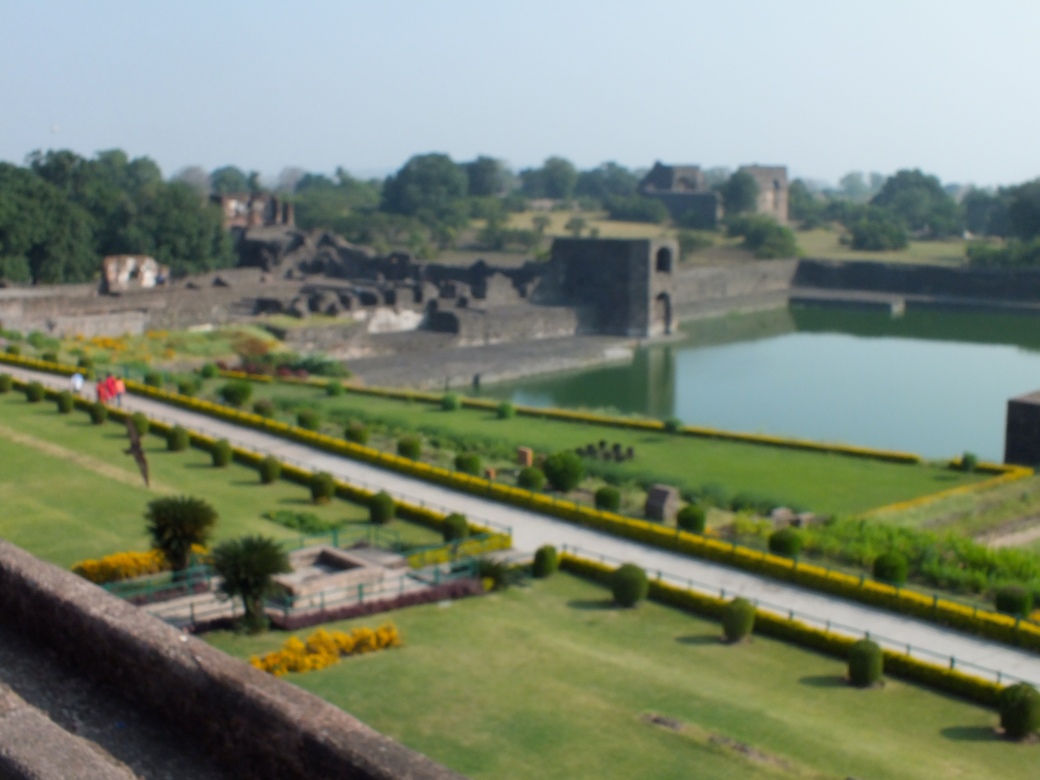 The scale of Mandu is quite remarkable, in all its aspects. Remarkable as well that this massive capital could be abandoned almost overnight and left empty til the modern era of tourism.

Mandu was once known as “the city of joy”. Today the atmosphere is more oneof mystery and romance. The views from the fort are quite stunning, and it’s a great spot to take in the vistas of the vast plains below – and if you find EchoPoint, when you clap you’ll be able to hear the sound you make echoing all theway down the valley. (Dragoman notes)

Much of the ancient capital is in ruin, but traces of extraordinary stonework remain. 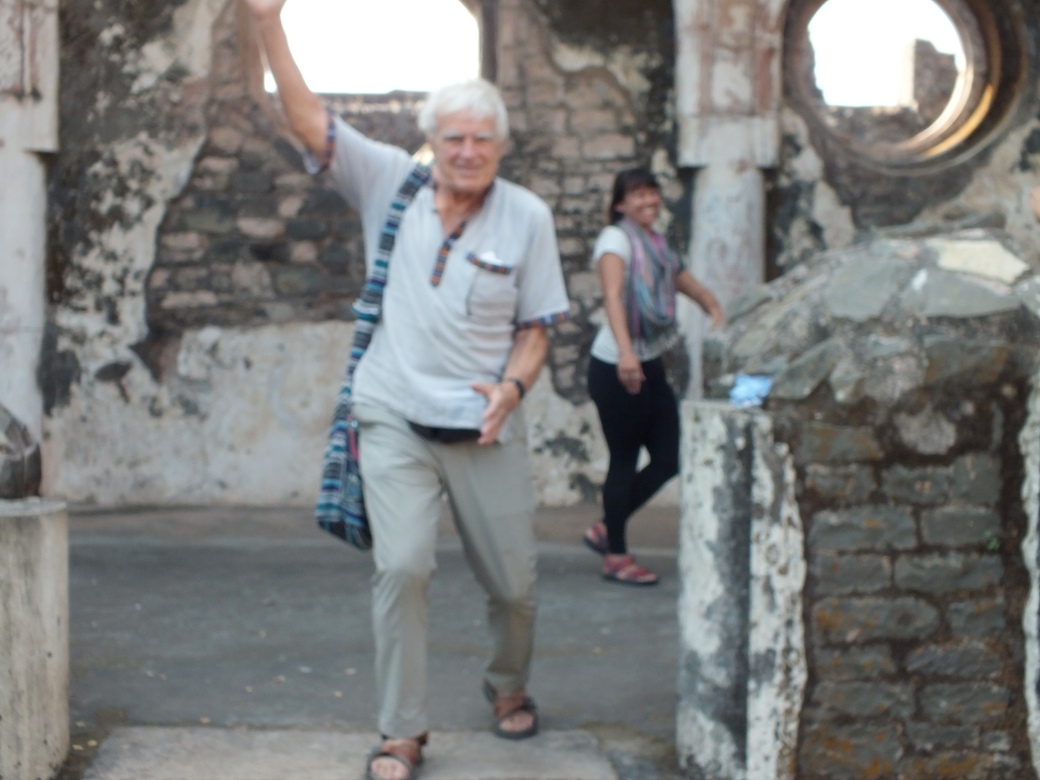 And in some cases derelict Denizens persist as well.

Some areas, carved from different types of rock, are better preserved, 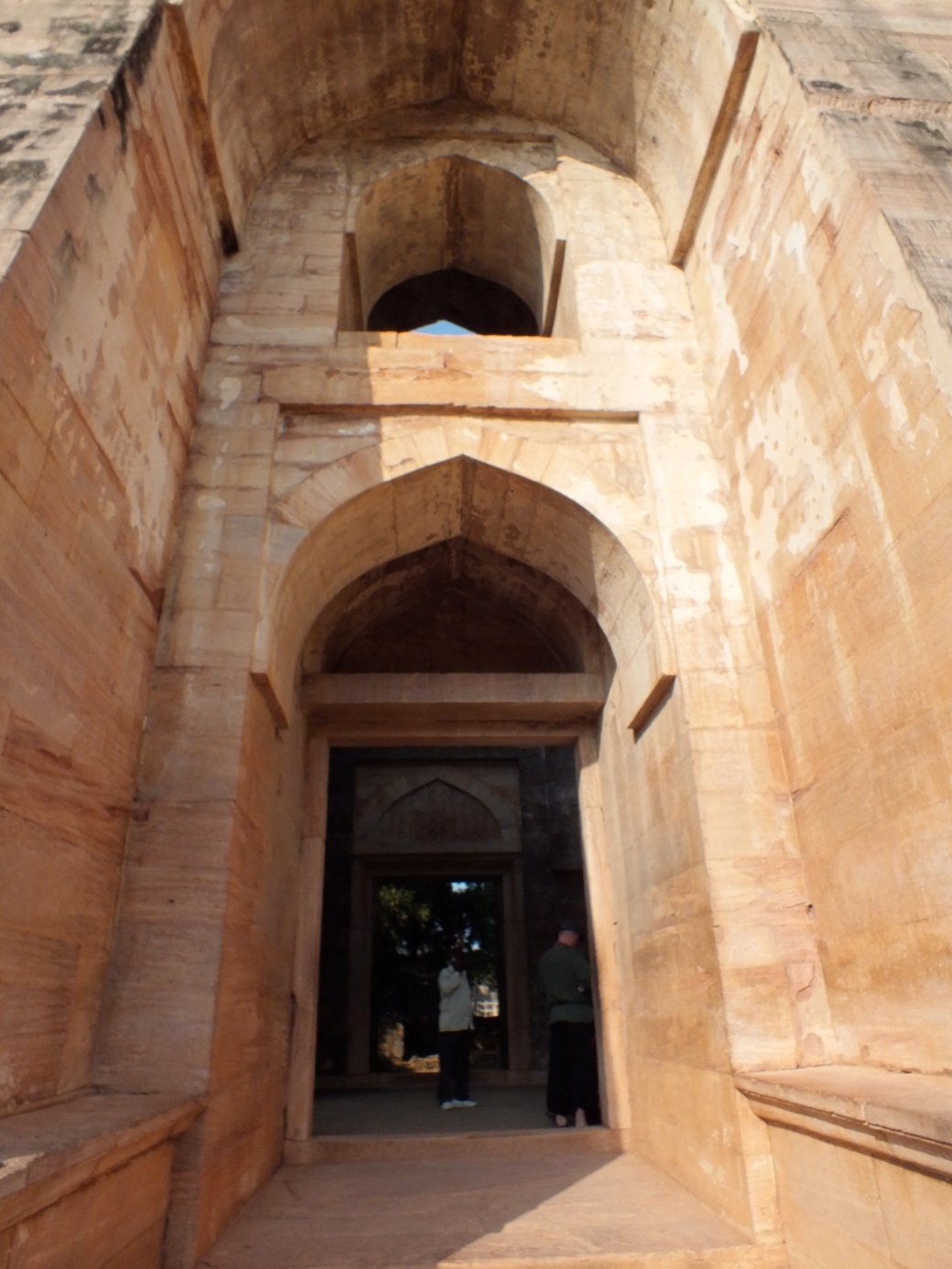 including a bath in the royal quarters,

and a pool for the members of the harem, reputedly the ‘home’ of 10,000 concubines under a sultan in the late 15th century . (gee, that would keep a guy busy) 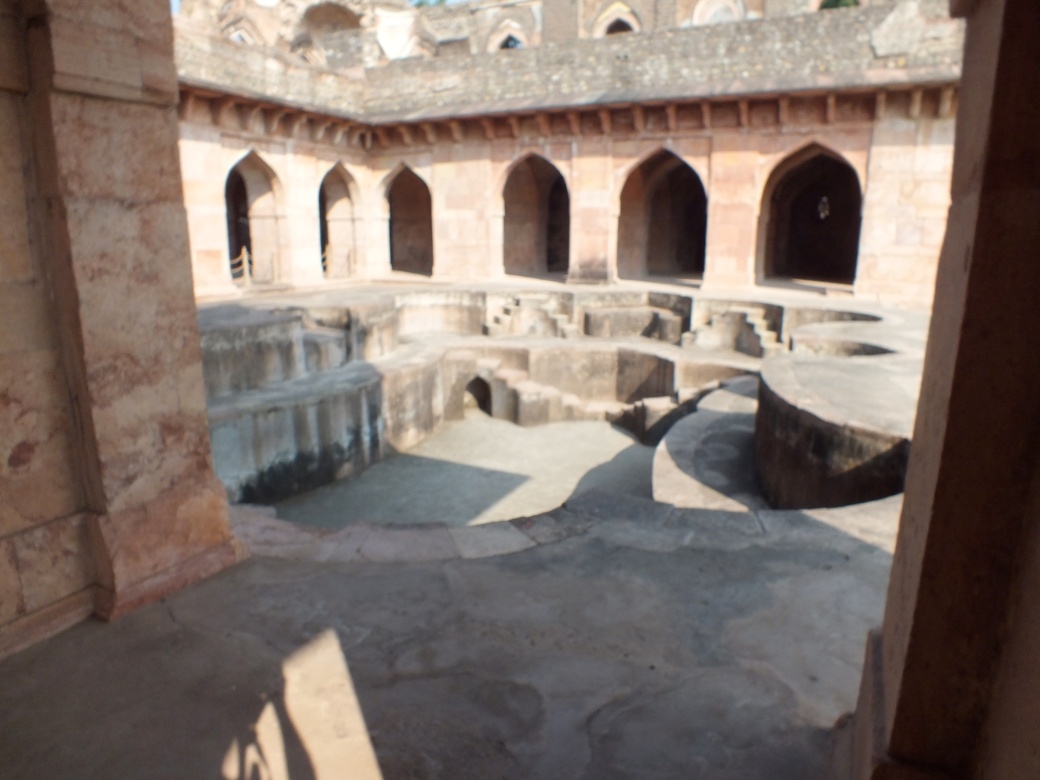 and a cupola perhaps intended for Ali’s yoga exercises. Maybe not.

And a warm surface to let sleeping dogs lie.

At Mandu we were able to meander the lower levels of the citadel, to experience the complexity of the structure and imagine what life in it was like. Once again, the scale of Mandu, its walls, its fortifications, its palaces, overwhelms the visitor, reflecting an enormous concentration of wealth and untold human labour. And this is but one of dozens of similar tribal principalities that dotted the Indian subcontinent at the time. It is only in very recent times that a form of national government in India has started to focus the accumulation of wealth on projects of broader public good. 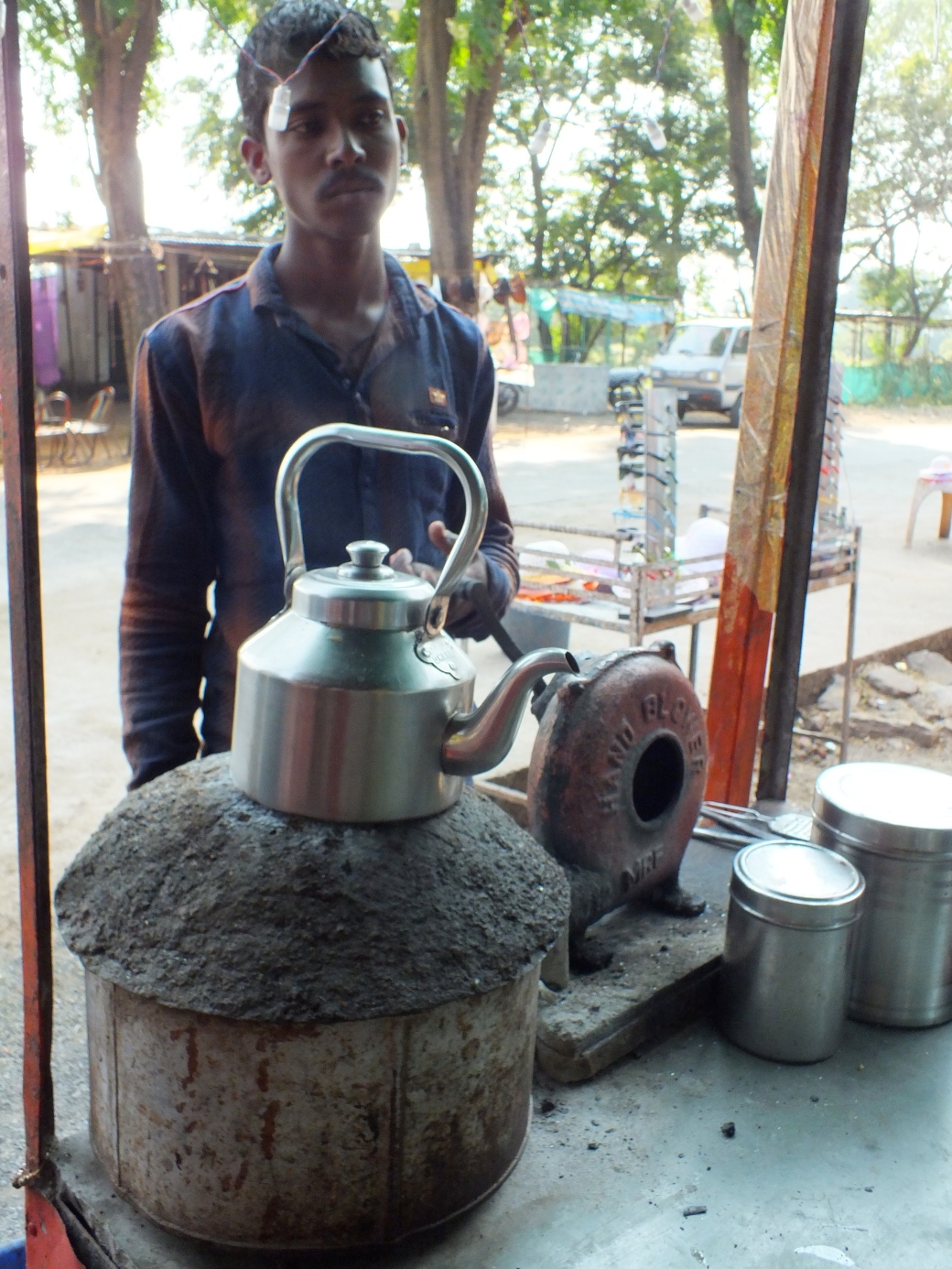 …we moved on to a series of shrines.

First, the Jama Masjid Mosque, modeled on the great mosque of Damascus. At the back of this grand courtyard lay a large hall…

…for the sunltan to hold court , from a pulpit under a central dome.

Speaking from the pulpit, one could be heard throughout the great hall.

Part of the complex held a mausoleum for Hoshang Shah, (Alp Khan, 1406-35, son of Dilawar Khan), the first formally appointed Muslim ‘king’ of Mandu – the tomb itself is India’s first marble building and one of the most refined examples of Afghan-syle architecture in the country. 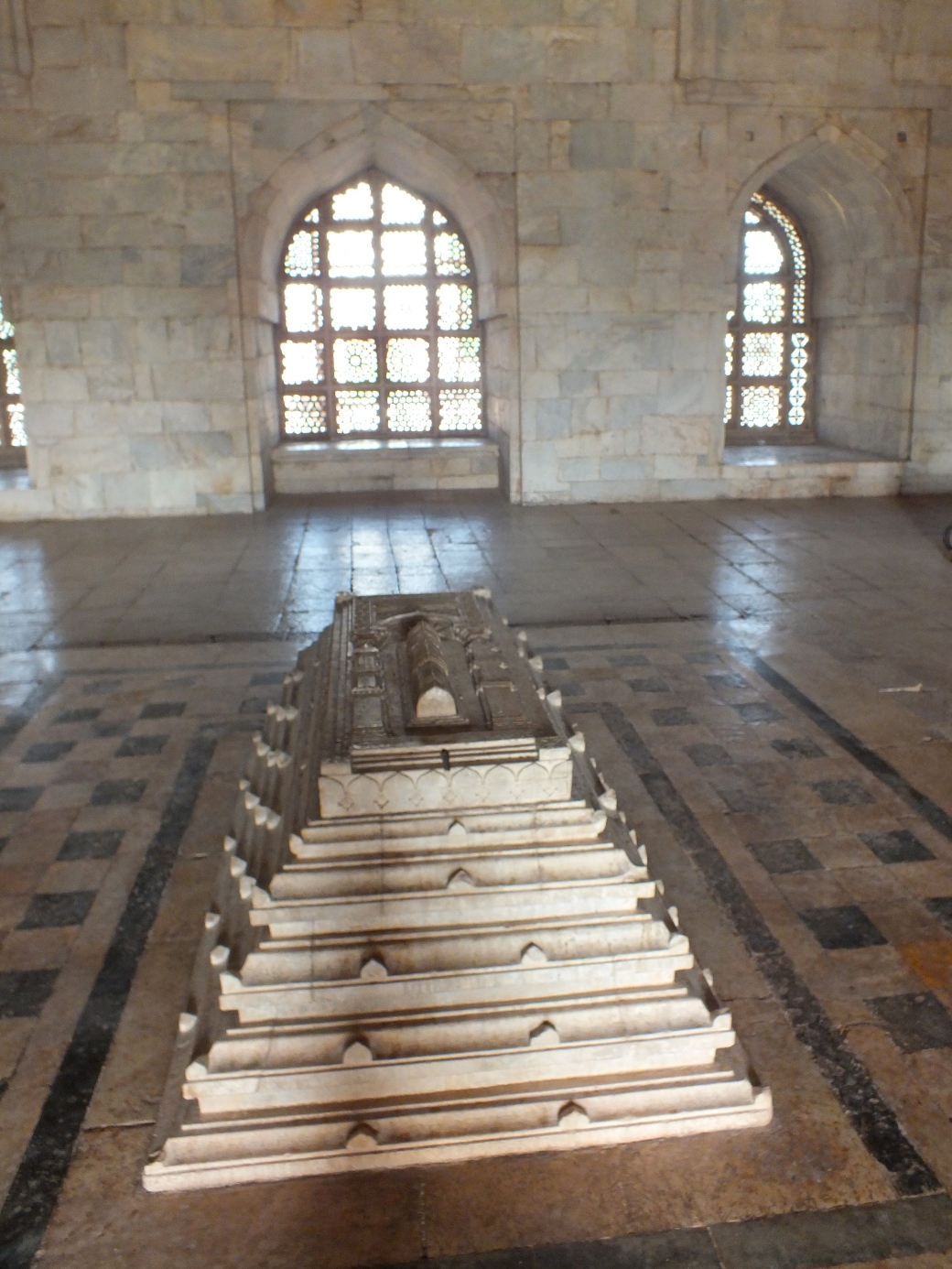 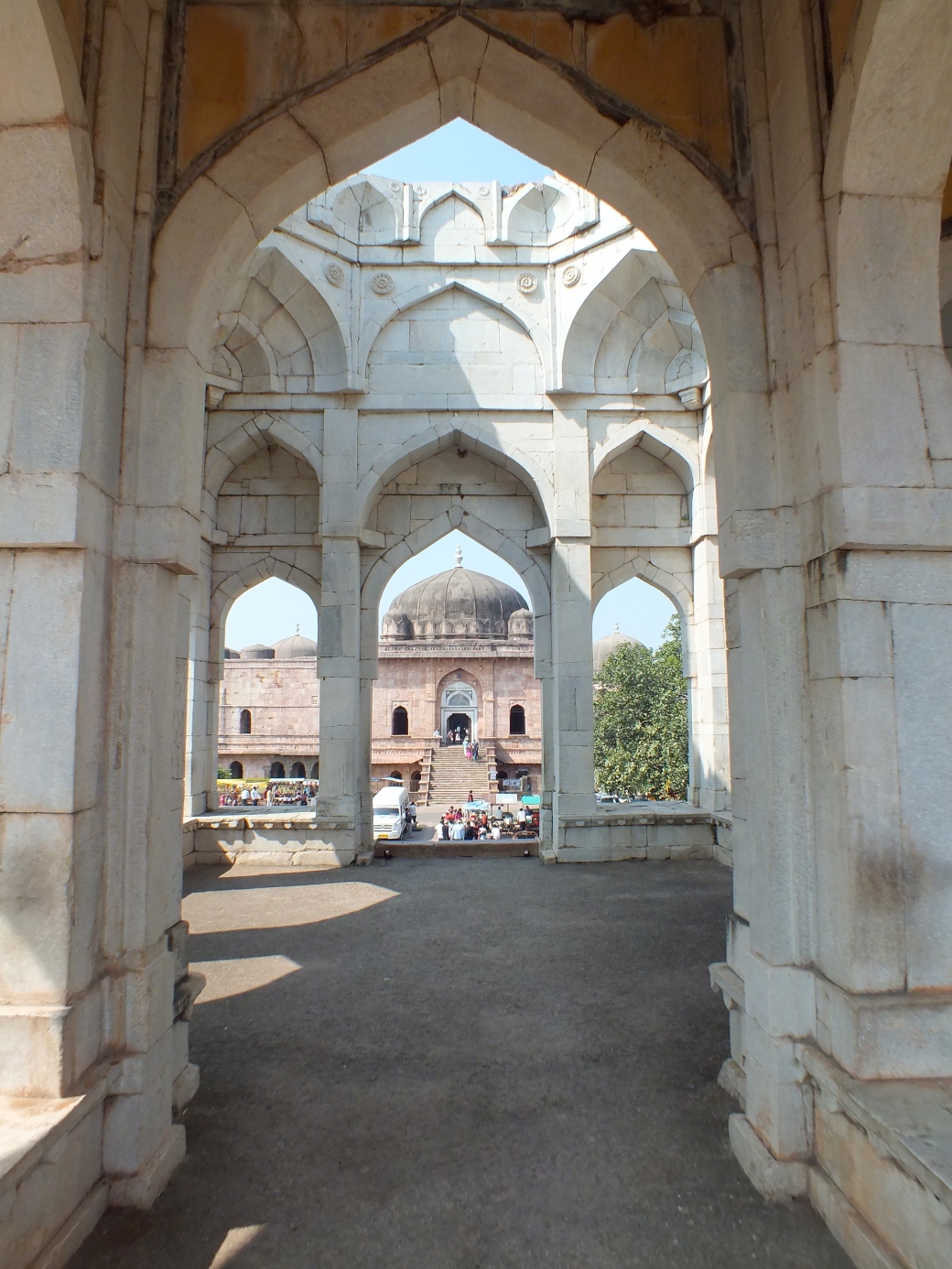 Further on, a ruined shrine, surrounded by its more contemporary neighbours. 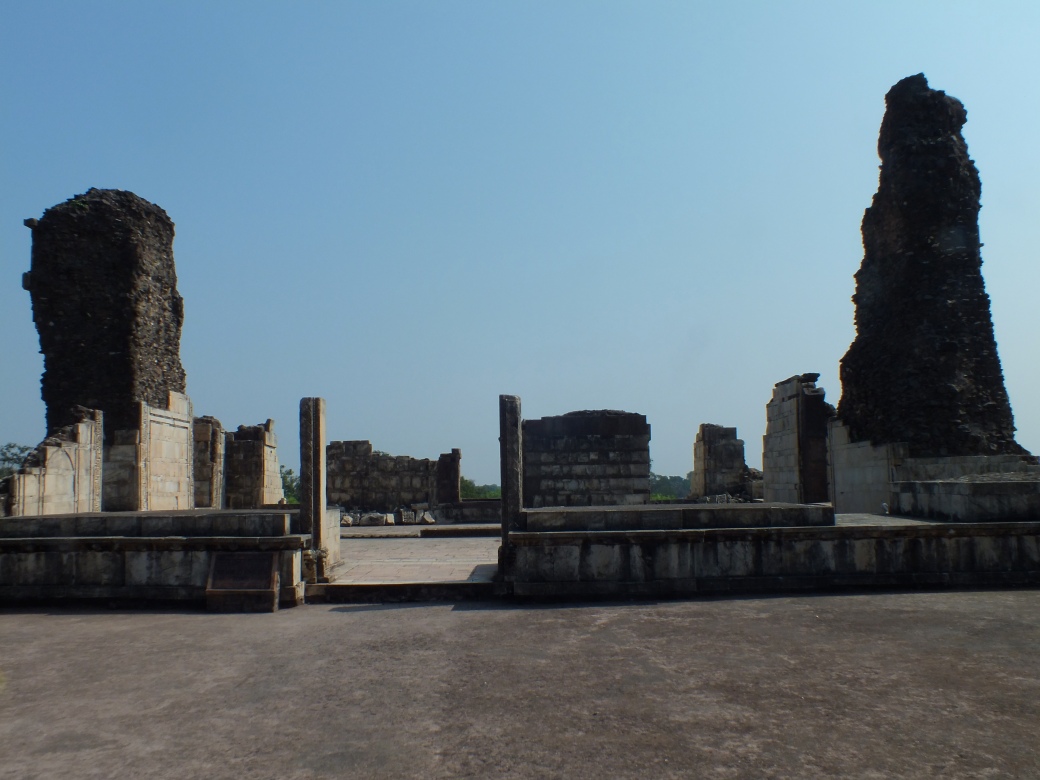 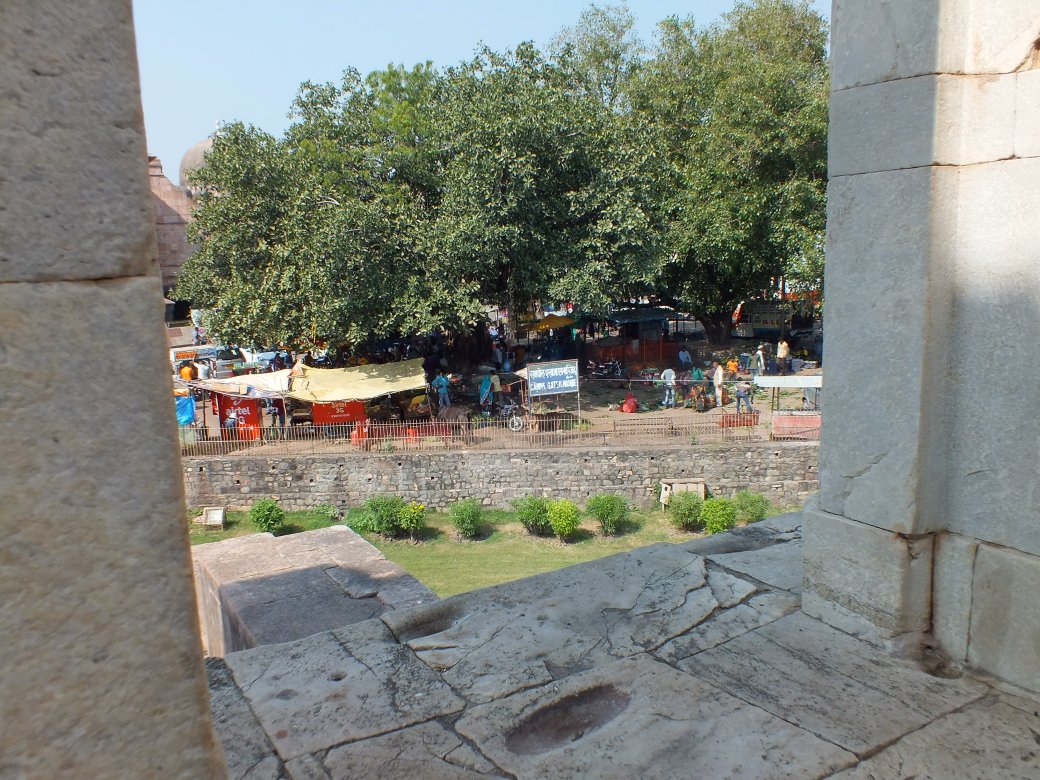 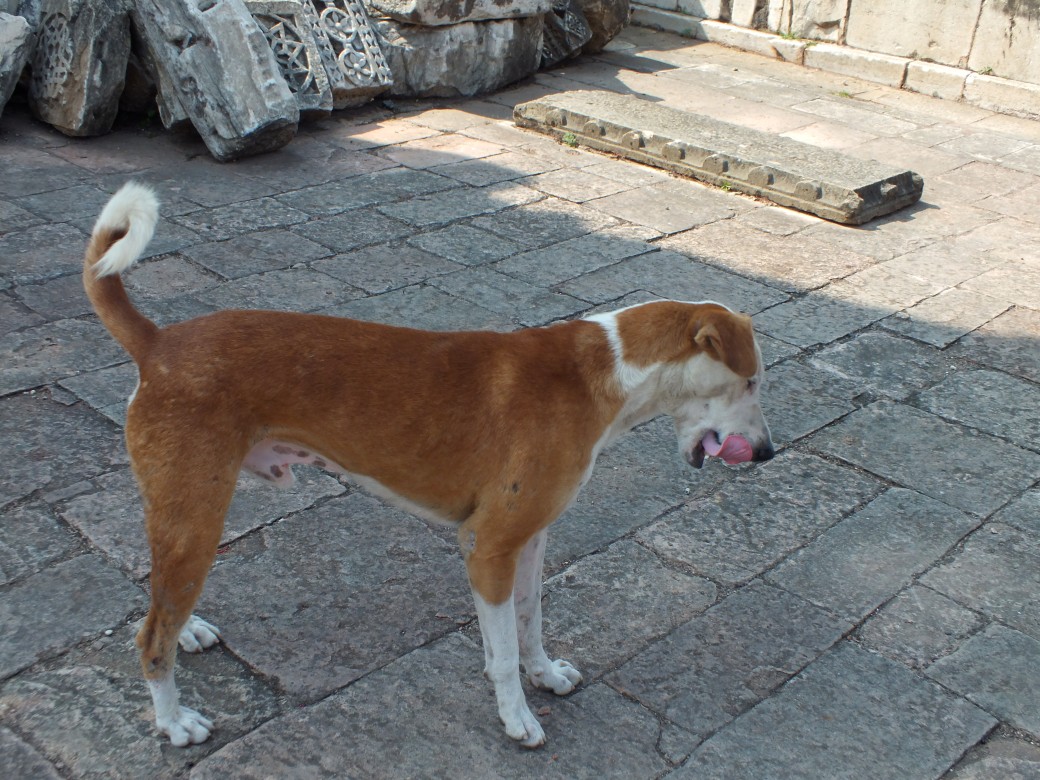 Including a distant relative of my dog Bingo, a bit thinner due to his vegetarian diet…

After working so hard at being bedazzled, we lunched, 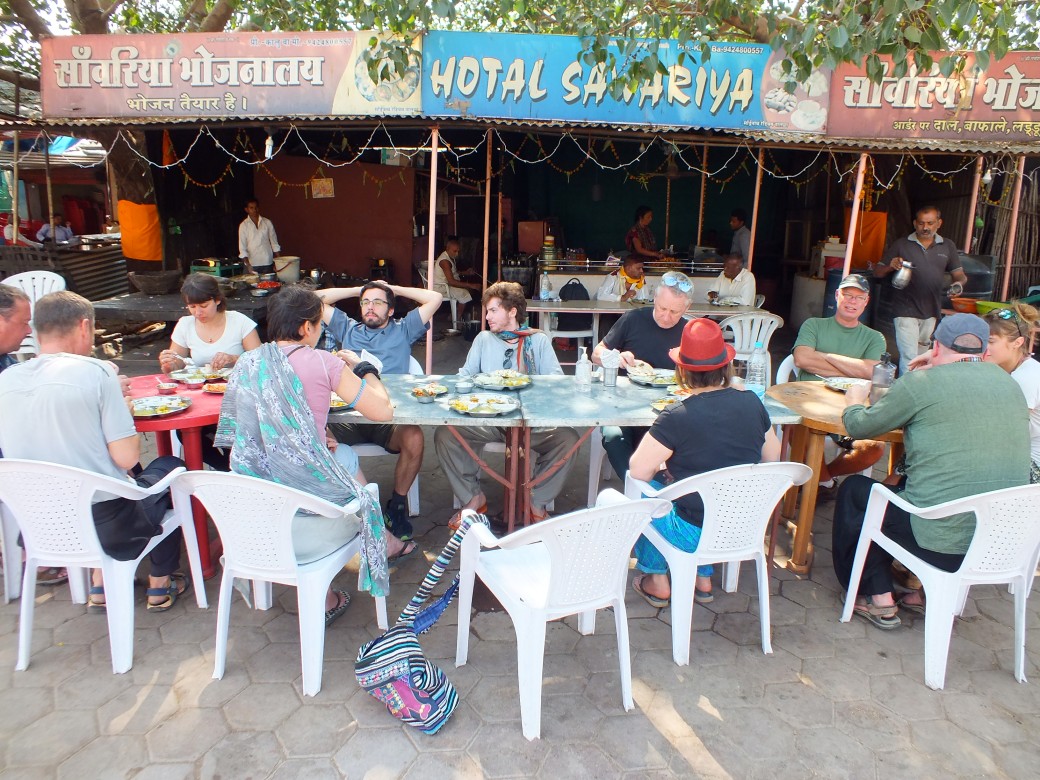 and took away a really curious fruit, sort of like breadfruit but crunchier. Not enormously popular.

Back on the road, we descended through the dominating mesas, past locals at work and play, over a massive river, probably the Narmada. 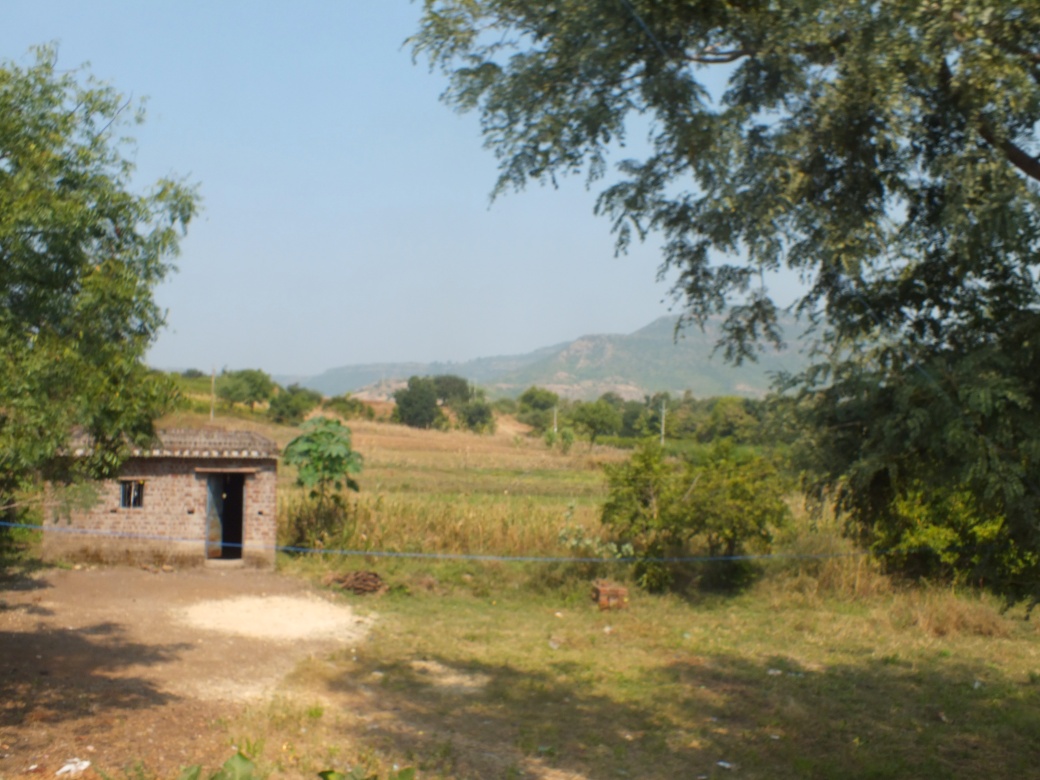 Back on flat terrain until we reached the reservoir of the Kharwand dam, where we were to ‘wild camp’. We wandered through a lot of dry fields to reach the edge of the lake. Nonetheless, we were hardly in the ‘wild’, for we were greeted by a small crowd.

Our hosts lived not too far away. When not summoned by distant voices, they swelled and shrank in numbers, and varied over decades in age. We engaged them in various activities. Not sure what this one was. 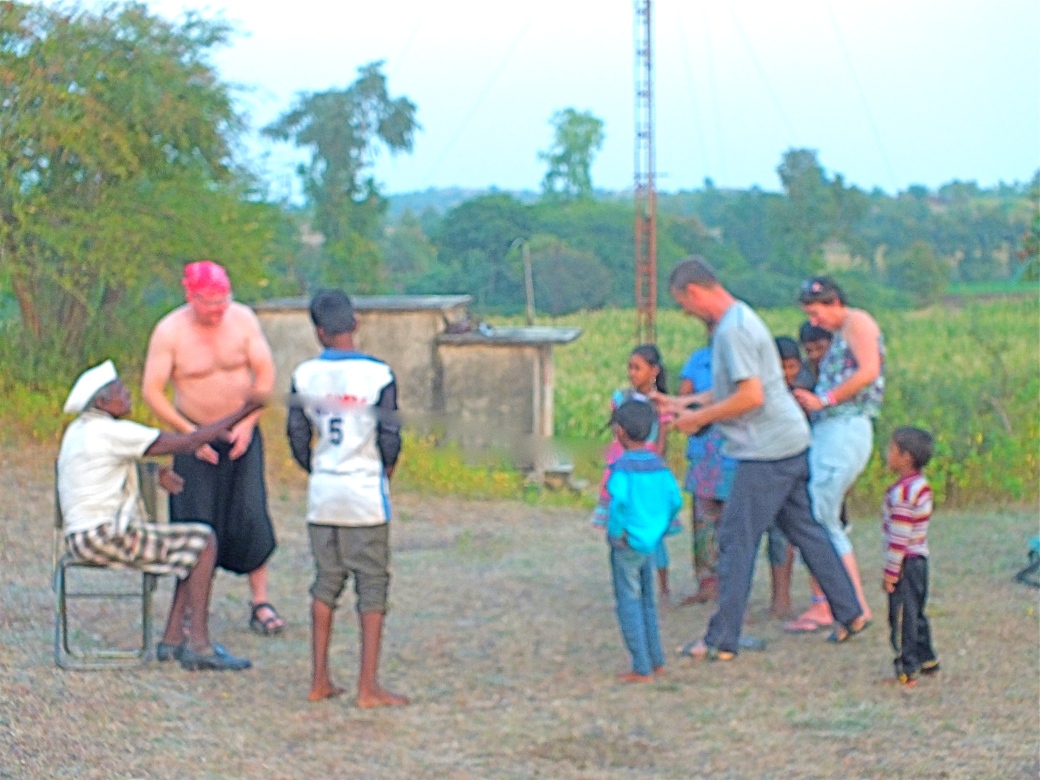 We soon had a compfy camp, complete with a cook we had picked up on the way from Udaipur.

Mike and I made several attempts to get to the water for a swim, but we were thwarted by dense reeds. The water looked clean, but very shallow. It was somebody’s drinking water, so just well we were banned. Instead, as the sun descended, 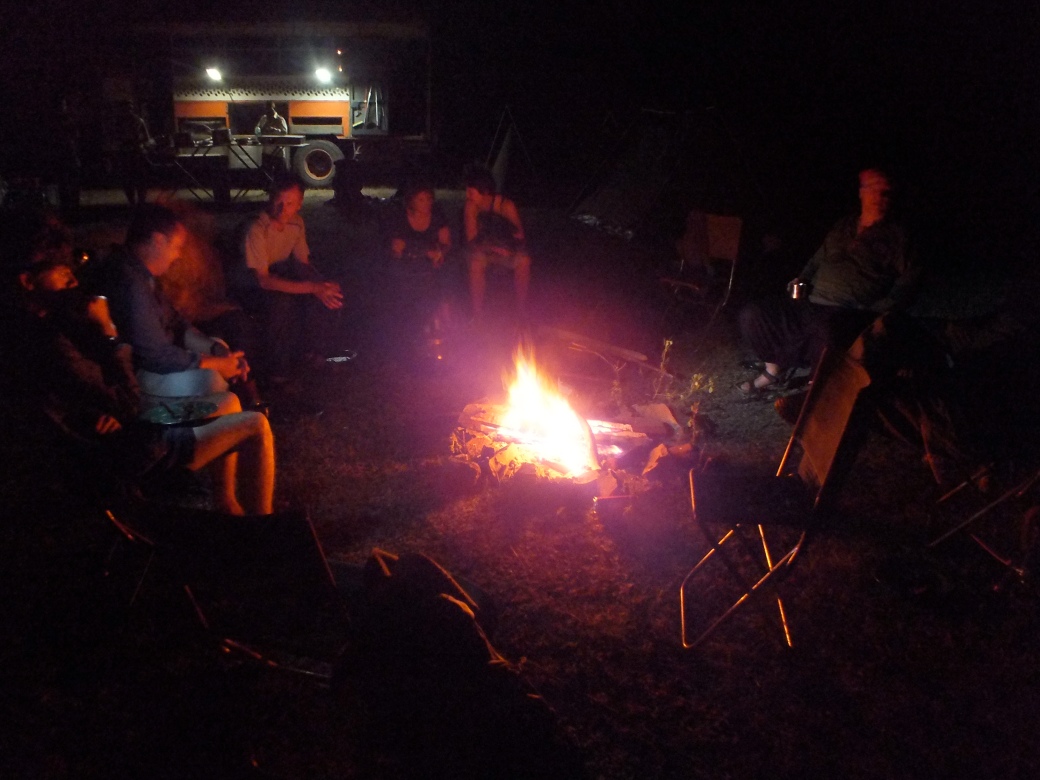 and by downing a punch concocted with an encyclopedia of ingredients also collected on the way from Udaipur: some fine fruit but several types of alcohol including a vile local brandy.

Unfortunately it tasted good, so it quickly disappeared, even a second batch. Eventually most of us passed from the scene, literally and figuratively, except for the Booze Brothers and Doug. Festivities continued around the fire. There was a lot of shouting and carousing and Pete’s Japan story for the 30th time, but I lost contact until quite late when I was awakened by shouts:

‘I think he was in with Dennis’.

I surfaced far enough to screech ‘No!’

With sunrise we discovered that the punch had done its evil work on Doug, As the effects intensified, he broke into Celtic chant, stripped down (we had not brought the woad), danced about the fire, eventually taking some exception to it, beating it to death with a stick. Not giving up easily, the fire lured Doug into its midst, inflicting some nasty cuts and burns.

We dragged the body out of Doug’s tent, and delivered whatever first aid we had at hand.

This must be what Dragoman means by ‘wild camping’.